Kasie was born in January 2017 and found abandoned when she was around two weeks old. She was diagnosed with a high WBC count, congenital cleft lip and cleft palate, and her preliminary exam suggested she may have been premature. 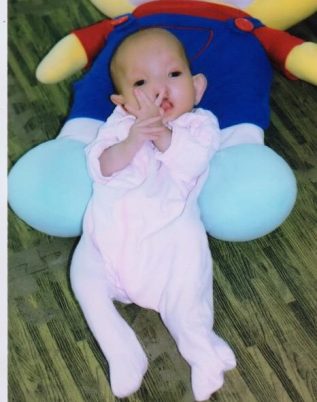 Kasie’s adoption report was written when she was 9 months old. At that time she was unable to say any words and wasn’t yet babbling. She had no facial expressions when a caretaker called to her or showed her toys. She would groan and stretch out her tongue to express her hunger and would cry if her diaper was soiled. He file mentions that the sound of her crying was very low. 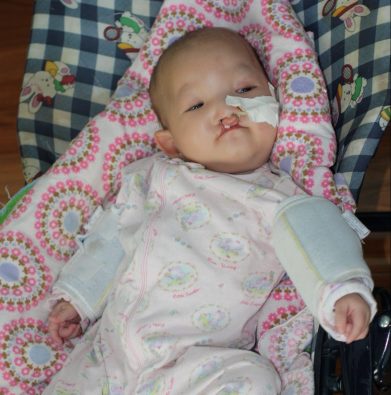 Kasie’s “health has been very good with no additional sickness, fever, etc. Her high white blood cell count has not been found to affect her daily life. Because her body is too weak, currently there are no plans to arrange her surgery. When the nannies call her name she does not have any response. Currently she still uses a gastric tube to feed her milk. Sometimes milk will come out of her nose. Usually she wants to be held more, and she should be assisted in doing exercises. Her development is very slow; currently she won’t crawl or sit independently. She does not babble much or imitate sounds; usually not many sounds come out. She does not interact with the other children. When the nannies hold her, her eyes do not follow the other kids’ figures.” 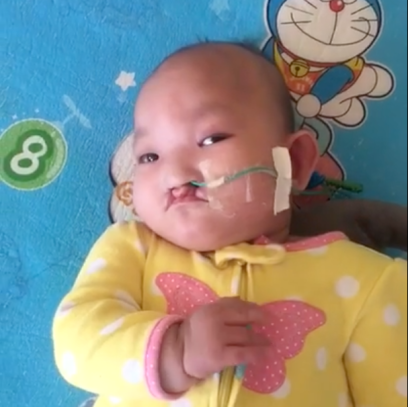 Kasie has significant developmental delays. She has a history of seizures; her first seizure was in August 2017. Her whole body shook for less than 2 minutes. She did not have a fever at the time. She had two seizures in October 2017. Her whole body shook. Medicine was given each time, and the seizures each lasted less than 10 minutes. She had two seizures in January 2017, with full body shaking. Preventative Valproic acid medicine was started. She is still taking that. She was hospitalized in December 2017 for treatment for pneumonia. She is only fed by tube at this time due to risk of aspiration.