Kam was born in December 2016 and found abandoned when he was 2 months old. He has been diagnosed with epilepsy.

When Kam was found he was said to have a rosy face and good spirit, but convulsions some times, and was diagnosed with epilepsy and mild anemia. He received supplements to improve his anemia and after a severe convulsion in February 2017 he was given anti-epileptic treatment. At the time of his report in May 2017 Kam was said to taking medication and in stable condition. He had a normal diet with milk as his staple food. When he would see his caregiver with the bottle he would quietly move is arms. He had normal motion development, could hold blocks in both hands, lift his head while lying on his stomach, and would try to grab things and kick his legs while lying on the bed. At this time he couldn’t roll over or sit without help. 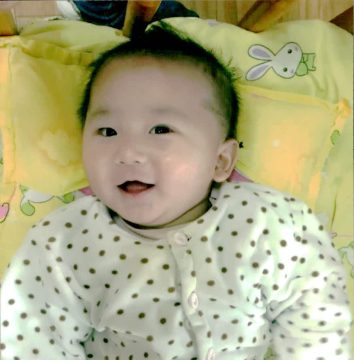 Kam was described as restless with a ready smile. He was said to giggle when happy and to be a smart boy. He could find the source of sounds and visually follow moving people or objects. He could make sounds and understood facial expressions. When a caregiver would smile at him he would smile back, and would stop smiling if the caregiver spoke to him seriously. He liked to be held and would stretch his arms out or grasp a caregivers clothes to let them know he wanted to be held. In nice weather his caregiver would take him outside and he would be happy. Kam was described as a cute baby.