Siam was born in March 2015 and found abandoned when he was a few days old. He has been diagnosed with eversion of both feet (Rocker-Bottom Feet) and a private issue. His foster home described him as “a sweet little boy who is very close to his friends. He has an engaging little personality that matches his cute, toothy smile.”

Siam’s medical report states congenital laryngeal stridor but a nurse said this had no influence on his health. He is also suspected to have contracture of joint soft tissue at his neck which makes it look short. Siam’s adoption report was written when he was 13 months old and he was described as a happy child. He was able to raise his head when lying on his stomach, roll over and sit alone. He was unable to stand and had delayed physical development. He was able to use his thumbs and index fingers deftly to pick up small objects, could reach for, grasp and pass toys between his hands. Siam could follow a moving toy with his eyes and had normal hearing. He was described as an adorable child who would smile when amused by a caretaker. He liked to play with other children, understood what “no” meant and sometimes would babble to himself. Siam was said to be active and extroverted, liked to play with toys, watch TV and listen to music. When he sleeps he liked to hold onto a towel.

Siam was still unable to stand or walk at the time of this update, however, in the videos below from when he was approximately 21 months old he can be seen trying to walk behind a walker. Although he could imitate sounds and could call his nanny, he wasn’t yet communicating with words when he wanted something. He was described as an active, lively and gregarious boy who loves to smile and play with toys. 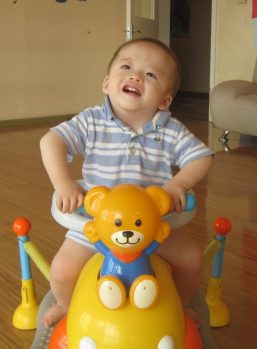 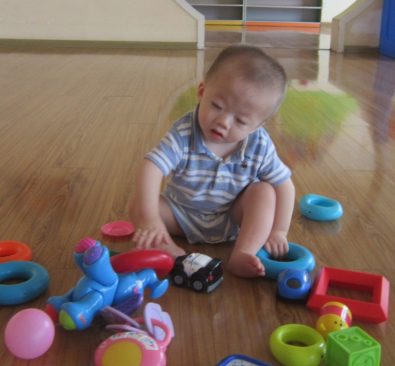 OCTOBER 2016 UPDATE FROM FOSTER HOME BELOW:

“Siam’s funny personality always has us laughing, and he’s learning more and more party tricks that keep us entertained. One of our favorites is when we say, “fang dian” (which directly translated means “lights blinking”) and he winks both of his eyes. It’s adorable, and we’re all smitten! We’re excited that Siam just started preschool! At times he is still hesitant, but overall he’s really enjoying it. His closest friend is in the same class, so that has helped make his transition easier. It’s so sweet watching these two play and learn together.”

DECEMBER 2016 UPDATE FROM FOSTER HOME BELOW:

“Siam is very playful, and he’s best buds with another little boy in his room. They have a blast in preschool together and on walks outside. We had a great time welcoming the fall season at Maria’s with a festival. The children had fun dressing up in costumes and collecting treats like candy, stickers, and bubbles from different caregivers around the room. Siam looked precious in his pumpkin costume!”

JUNE 2017 UPDATE FROM FOSTER HOME BELOW:

“Siam is sometimes hesitant to try new things, but we’re always so proud of his bravery when he tries them anyway. Siam recently got to take a trip to McDonald’s. He was unsure of the french fries at first, but after his first bite he discovered he loved them! He was also a little apprehensive about swimming on a recent pool day, but he bravely gave it a try and ended up having such a fun time! We love Siam very much.”

AUGUST 2017 UPDATE FROM FOSTER HOME BELOW:

“Siam seems to be growing up so quickly. He’s constantly running around, and keeps his nannies busy chasing after him. We’re are so proud of his resilience. Siam has overcome a lot to be able to run and play. In preschool, Siam is the “class clown.” Sometimes he’ll begin singing loudly in class, and when the other children join in they’ll all break out in giggles.”

OCTOBER 2017 UPDATE FROM FOSTER HOME BELOW:

“We had so much fun celebrating the Chinese Mid-Autumn Festival with the children! Siam loves parties, and this one was no exception. He had fun snacking on mooncakes and coloring with his friends!”

NOVEMBER 2017 UPDATE FROM FOSTER HOME BELOW:

“Siam and his preschool teacher both dressed up as elephants for our Fall Festival, and it was adorable. He kept everyone giggling as he practiced making elephant noises, and he paraded around the party without ever letting go of his pumpkin cookie! He visited the photo booth, made a pumpkin craft with his nanny, and made sure not to miss out on any candy. We have so much fun partying with Siam!” 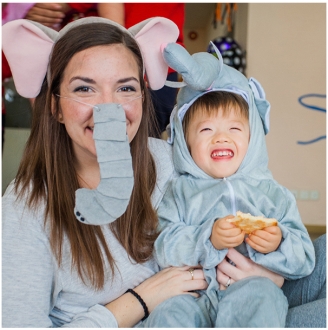 DECEMBER 2017 UPDATE FROM FOSTER HOME BELOW:

“Siam recently returned to his guardian orphanage, so we ask that you would come alongside us in praying for him during his transition. We love Siam very much, and count it an absolute joy to have loved and cared for him. We will miss his fun, happy personality! It’s our prayer that he would be welcomed into a loving family through adoption.” 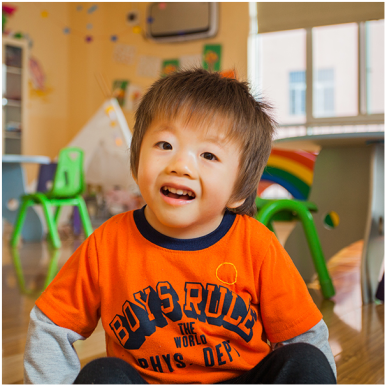 “Siam is a cheerful and silly little guy. He’s curious and independent, and he keeps his nannies and teachers on their toes as he runs around the room. He’s a great helper — always wanting to help take care of the other babies in the room, and he always shares his snacks and toys with his friends. He’s resilient and strong — always surprising us with his tenacity. When you walk into his room he is the first to run up to the door to greet you, and the first to blow kisses when you leave. He loves to play with toys, learn new games, and show off his dance moves. He loves to sing songs, mimic the hand motions, and has even memorized parts of his favorite books! This boy will move mountains! Our greatest hope is he will soon know the love of a family and have the opportunity to share all of his spunk, sweetness, and more!”