Joshua was born in January 2015 and was found abandoned the same week.  He has been diagnosed with congenital heart disease (VSD, ASD) and Down Syndrome. 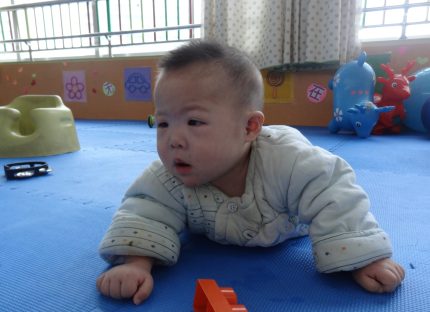 Joshua’s adoption report was completed when he was 12 months old.  At that time his motor development was described as delayed.  He could hold his head up while lying on his stomach, roll over, grasped toys in his hands, knew his name and turned his head towards the sound when his name was called. He wasn’t yet speaking but made eye contact with his nanny and could follow a moving object by moving his head from side to side.  He liked toys bells and being cuddled.

Update from an agency representative who visited Joshua’s orphanage: Joshua “is a calm and quiet baby with a tuft of fine hair. His file lists diagnoses of a heart condition, visual impairment, hard of hearing, and delays, but the orphanage let us know they have diagnosed him with Down syndrome (they thought it was in the file as well). His eyelids are droopy, but he was able to open them wider sometimes and does seem able to see.

He needs support to sit and does not yet crawl, but he holds his upper body up very well when lying on his stomach, and rolls over unassisted. Occasionally he reaches for toys that are in front of him; we saw him grab the mallet for a xylophone toy. He doesn’t really babble, just blows raspberries. He was very easygoing and didn’t fuss at all.”