Nathaniel was born in January 2015 and found abandoned when he was about a month old. He has been diagnosed with Down Syndrome. 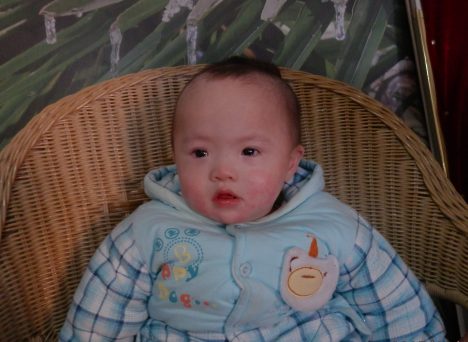 When Nathaniel first entered his institute he was think and weak, didn’t suck well and vomited easily. Under the watchful care of the nannies his milk intake began to increase and his vomiting decreased. He was a good sleeper and was doing better. He was able look when his name was called, hold toys and play with his hands and feet. At the time of his report he was just under 1 year old and said to be very cute. He liked smiling and could roll over, stand for a long time with support, knew to hold toys tightly and understood adult’s facial expressions. He could visually follow moving toys and look for them if dropped. Nathaniel was fond of listening to music and had a ready smile. When the nannies played with him he would giggle. He could recognize familiar people and cried around strangers. Nathaniel was said to be gentle and rarely got upset. If he did the nannies knew to cuddle him for comfort. He liked watching TV with his caretaker. When he was happy he would say “diedie” repeatedly. His favorite activity was sitting next to his nanny and playing with her and his favorite toys are those that make sound. Orphanage staff care about Nathaniel and hope a family with adopt him.