Macy was born in November 2013 and has been diagnosed with developmental delays.  Don’t miss her January 2016 update below! 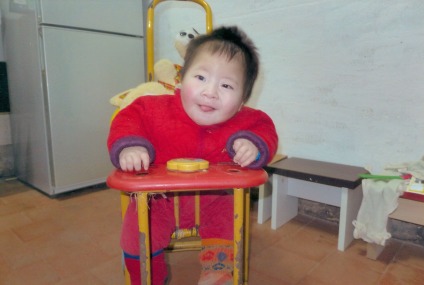 Macy was abandoned near the gate of an orphanage when she was around 10 months old.  During her time living in the orphanage she received delicate care and grew happily.  At the age of 1 year she could lift her head while lying on her stomach, could stare at objects nearby and follow moving objects.  She responded when being played with and was excited to see her bottle.  In an effort to give her better care she was sent to live with a foster family in December 2014.  At that time she had a rosy face, flexible hands and feet, could take objects with her hands, bang toys together and put food in her mouth.  She could sit on a sofa for awhile but not without help.  She would smile when teased, liked playing with others, babbled and was responsive to sounds.  She had a good appetite, attached well to foster mother and would cry when held by strangers.

At the age of 18 months Macy could sit without help, but not steadily.  She had a good mental state, ready smile, liked hugs and communicating with others.  She was interested in new toys and playing with her younger sisters who she would hold hands with when sitting together.  When her foster mother would speak to her she would look and seemed to understand.

At the time her adoption file was completed Macy was 20 months old.  She was able to crawl on hands and knees, sit steadily and stand leaning against a wall.  Her hands had flexibility and she was able to pick up small beans.  She knew her name, responded to it and understood what her foster mother said to her.  She could follow directions such as clapping or shaking her hands when dancing.  Macy liked to play outside and would shout happily when her foster mother took her out.  She was said to be gregarious and liked to interact with others.  In July 2015 an MRI was completed of Macy’s skull and there were no abnormal findings.

Has she been given a medical diagnosis or received treatment for anything other than “Developmental Delay?”  She’s never had other medical check ups. The doctor said she’s just developmental delayed. Not sure if she has Cerebral Palsy. She didn’t receive any treatment. She’s in foster care now. Foster mom think she has made a rapid progress. Her limbs are flexible. She’s smart and has a ready smile. 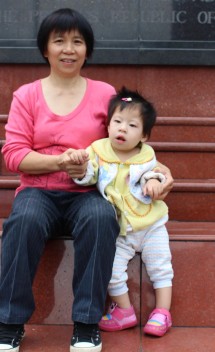 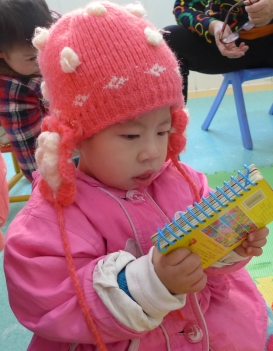 How does she communicate with her foster family? Does she speak any words?   She’s not talking yet. But she likes to burble and she’s “talkative”. She can understand some as well. She can make many sounds, just burble. When you talk with her, she’ll talk back to you. Now she can use some gesture and sounds to communicate with foster mom. When she’s hungry, she would cry or make noises. When she wants something, she’ll point and burble or go get it by herself.

Does she imitate well?   Yes, she’s good at imitating. When she sees people dancing in TV, she will dance, too. Play music for her, ask her to dance, she will wave her body to dance.

Can she point to, or name parts of her body?  She can’t point to or name body parts yet. She only knows hands now. Ask her clap your hands, she will do it. Or when she’s dancing, ask her put your hands up, she will follow the instruction.

Please describe her personality and some activities she enjoys.   She is very cute and active. She gets along well with others. She’s good at imitating.  She loves to go out, enjoy places like supermarket, playground, etc. she likes to play with other children and play games and interact with adults.

Is she able to feed herself?   She can’t feed herself yet. She can hold her bottle to drink milk/formula. 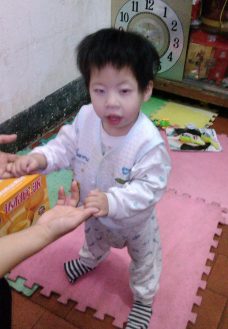 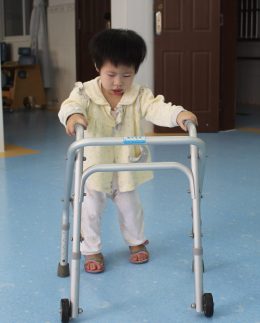 She is walking 1-2 steps independently; she can walk when holding on things.
Her hearing and vision are normal.
Developmentally she is slightly delayed compare to other children her age. 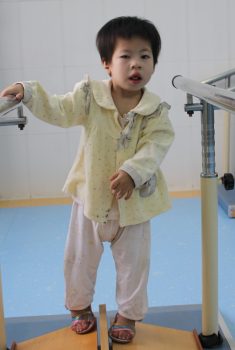 She can only say “baba”.  She is not in any schools; her foster parents are reading to her and teaching basic some knowledge of daily activities. She likes outdoor activities and playing with toys.  She has no allergies. 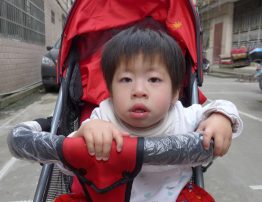