Carson was born in May 2013 and found abandoned when he was around 7 months old. He has been diagnosed with motor development delay and is said to be a carrier for a private diagnosis. In November 2017 it was reported that he was taking daily medication for epileptic seizures. 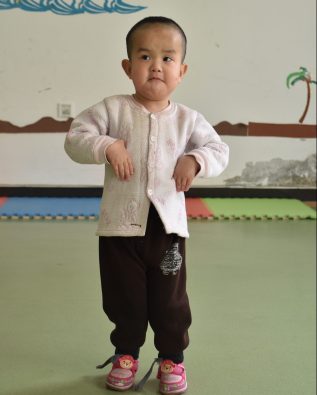 When Carson initially entered his institute it was noted that he had normal development. At the time his adoption report was written around his 4th birthday. He could speak in sentences of 3-4 words, say “good morning,” and count, and could sing and dance. He was able to put on and take off his clothes, could help his teacher take out the trash and could follow directions when asked to put an object in a certain place. Carson could play games, slide and run. He could go up and downstairs without help, could imitate drawing lines and wash his hands. He enjoyed listening to music and playing with toys, and had a ready smile. He got along well with others and was fairly extroverted. His favorite activities were running and riding a bike and his favorite toys were cars and a rubber ball.

Carson’s motor skill development is OK but slightly behind same-age children. He can do what a child at his age should be able to do such as running, jumping, going up and down stairs. He can feed himself, brush his teeth, wash his face, dress, string beads, pass a ball and use the toilet. His mental development is normal, although not as good as same-age children. His cognitive development is OK. He can count, recognize numbers, fruits and animals, and can mimic animal sounds. He can understand and carry out directions given to him by caretakers, and can express his needs. He knows right from wrong, praise and criticism.

In August 2017 Carson had an episode of Epilepsy that lasted 30 minutes. There are more details about this episode to be shared with families considering him. At the time of this update Carson was taking daily medication.