Sam was born in February 2012 and found abandoned around his third birthday. He has been diagnosed with Cerebral Palsy.

After his finding Sam was temporarily cared for outside of the orphanage and entered his institute in September 2016. Upon admission it was noted that he had fair muscle strength, poor balance when walking and difficult language communication. He could speak basic words but didn’t have very clear pronunciation. Sam’s adoption report was written in May 2017 and at that time he was being raised in the institute. He attended a special class and liked to study, had strong imitating ability, and his language abilities had improved. He could make simple communication with people and speak in sentences, could help the adults with simple chores, was close to his nannies and got along well with the other children. He liked listening to music, playing games with peers, watching cartoons and enjoyed outdoor activities. It was noted that his EQ was high and he could act according to adult’s cues. When seeing that a nanny was tired he would pat her back and tell her she works too hard. He asks caretakers if they’ve eaten and cares about the people around him. He has basic self care abilities and can eat, sleep, undress and use the toilet independently. Sam could recognize shapes and colors, and could count and write simple characters. He could go up and down stairs without help, imitate drawing lines and was able to pick up small objects with chopsticks. 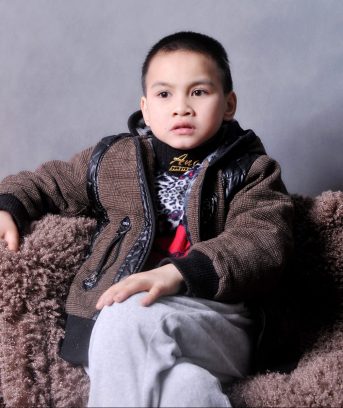