Adam was born in March 2011 and found abandoned when he was around 2 weeks old. He’s been diagnosed with repaired club feet and hypothyroidism. At one point he was taking medication (Levothyroxine) for this issue but it was discontinued at some point. There are several updates and lots of pictures and videos below. To request Adam’s file for review please complete the eligibility questions at the bottom of this post. 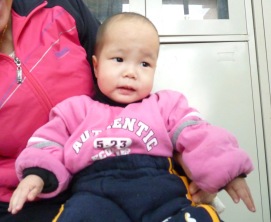 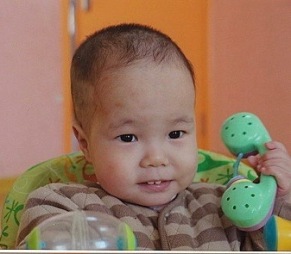 At the age of 8 months Adam could hold his head up while lying on his stomach and by 12 months he could move his head freely to locate sounds, stretch his hands out to touch toys around him and was babbling in response to caretakers talking to him.

At the age of 2 years he liked to watch children playing and was shy to strangers, covering his face with his hands. By 2.5 years old he could sit alone. At the time of his adoption report he was 3 years and 1 month old. He could walk with holding hands for support, understand simple instructions and pick up small objects. He had a ready smile and was beginning to speak saying words like, “mom,” and, “hello.”  His favorite activity was playing outdoors and his favorite toys were plush toys. 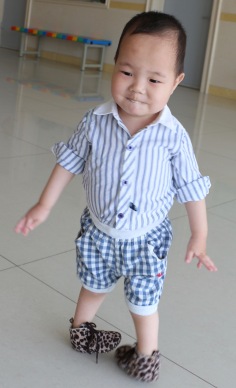 How does the SN affect his/her health?  It took longer time for him to learn how to walk.

Is he potty trained?  Not yet, he needs to wear diapers.

Please describe his/her personality in details.  He is outgoing and polite with a good temper. He loves to say hello to you.

Is he/she well behaved and obedient?  He behaves well, obedient.

Gross motor skill?  He can walk.

Fine motor skill?  He can pick up little things.

Is he/she in any kind of school? No.

Emotional development? Is the child attached to anyone? Who is he/she close

How is his/her social skill? Does he/she get well along with other children and

adults?  He gets along well with caretakers and other kids.

Is he/she under foster care or live in the orphanage?  He is living in the SWI.

How is the language ability of the child?  A bit delayed, but he can speak short sentences with clear expressions.

Can the child follow directions of adults?  He can follow instructions, like bringing a cup to Party A and taking a ball back from Party A.

How well is he talking? Can they give an example of a sentence he can say?  He speaks full sentences, such as: “Grandma Wu is here”, “Li Zhipeng opens the door”, “Telephone is ringing” He can sing the song called Two Tigers with the music.

Is he in any form of school?  He got education in the orphanage. He learns how to speak, play games and listening to the stories.

What are his favorite things to do?  He likes to play with other kids, he likes toys, wooden blocks, rocking horse. His favorite toy is cars. 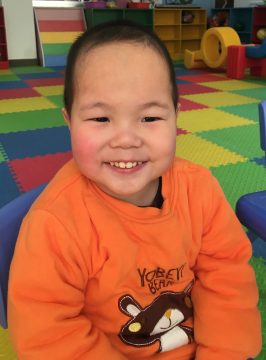 What is his personality like?  He is extroverted, happy and active. He likes to greet others while meeting them.

Can he bend knees? What about elbows? Shoulders? Hips?  He can bend and move his knees, elbows. His shoulder and hips can move.

Is he running? Can he do stairs?  He can walk very fast. He does stairs while holding the handrail.

From orphanage staff: He is currently receiving basic education at the orphanage, such learning to talk, playing games, listening to stories, and so on. His knees and elbows can bend and move; his shoulders and hip joints are movable. He can speak complete sentences, such as:” Grandma is coming”, “Li, Zhi Peng opened the door”, and “someone is calling”, etc. He can sing “Two Tigers” with the music. He is walking very fast and he can go up and down the stairs when holding on the rails. He is outgoing, active, cheerful and sociable. His caregivers adore him very much. He likes to play with other children and loves to play with toys, such as building blocks and toy cars. 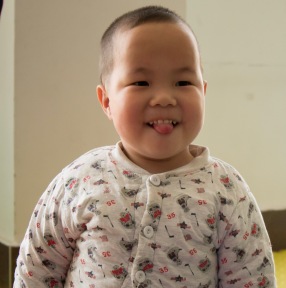 From a US agency rep who met Adam: He is an outgoing and friendly little boy, who immediately greeted us with a “hello!” He had a big smile the whole time we were there, and came over right away and put his arms up to be picked up. Though his feet are extremely turned in, he not just walks but runs, and very fast! He moved around the room a lot, but would frequently come back to one of the visitors to tell us something or ask to be held again. He speaks in sentences clearly, such as “time for bed,” and has no issues with daily communication. He is not in preschool yet and has not been taught to count. He enjoys all kinds of toys, and gets along well with other kids. As we left, he called “bye bye” to us and waved! He is an adorable little boy who is eager for attention and affection. He needs a family to get him medical care and pour love on him! 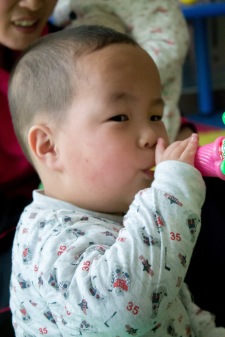 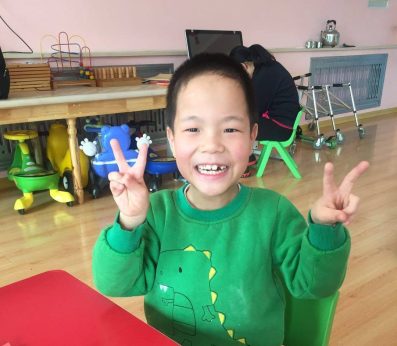 His most recent update notes that he is doing very well. He has had surgery for his club feet and now wears braces. He receives physical therapy every day. Adam is able to walk, run, jump, and climb stairs without assistance. He attends classes inside the orphanage where he has learned how to write, sing, and recite poems. He enjoys performing and playing with other children. He is an outgoing and happy child who gets along with all of the nannies and the children.