Elliott was born in May 2006 and found abandoned when he was about a year old. He has been diagnosed with cerebral palsy and delays.

At 1 year old Elliott liked to listen to music and could sit up and hold his bottle of milk. At 1.5 years old he could call for “mama” and “aunt.” He got excited when he saw food and would raise his hands to ask for it. He could dance with music and scream. He was a little afraid of strangers and knew simple gestures and words. At 2 years old he was active and naughty. He liked to sit on a chair with children in his room. He would sometimes fight with other children over toys and would exercise by standing up holding onto something for support. At 3 years old he liked to listen to others talking. He had a good memory and could express well even though he wasn’t speaking much. He liked to eat snacks and continued exercising by standing. At 4 years old he could eat by himself and sang children’s songs. He liked to watch TV and was still unable to stand independently. At 5 years old he received surgery and rehabilitation. At 6 years old his legs were still weak despite exercising. He still needed support to stand and use the toilet. At 7 years old he was talkative and could clearly express his needs. He liked outdoor activities.

At the time of his report Elliott was just about to turn 8. He could count, knew left from right, colors and spoke in sentences. He was described as being active and extroverted and fond of reading picture books. He was closest to caretakers and had a ready smile. 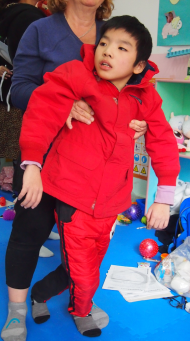 Agency staff met Elliott in November 2016 and said he was pleasant and alert. He knew what was said to him and his verbal ability was good. He could walk, although slowly. He was not attending school but attended a special class within the orphanage to learn daily care skills. They said he can read but cannot write. He liked to play with toys and watch TV, and seemed to be sweet and independent.