Annabel was born in April 2007 and found abandoned when she was 2 years old. She has been diagnosed with binocular corneal necrosis and bilateral external auditory canal stenosis. An advocacy team just met Annabel in November 2016 and learned that she had surgery in 2013 for stenosis of the external auditory meatus.

When Annabel first entered her orphanage they noted she could see nearby objects and could respond when she was spoken to loudly. She was introverted and didn’t like to speak. Annabel’s adoption report was written in March 2012 when she was almost 5 years old. At that time it was noted that when she saw familiar caretakers she would say “hello” to them happily. She liked playing with children on the playground, could feed herself and use the toilet. She was still described as a quiet child. She attended a preschool class through One Sky and when her teacher took her to class she was very happy and would hold hands with the other children to greet them. During sports she joined in with the other children and in the classroom she did crafts carefully after observing her teacher and other children. Annabel could go up and down stairs, jump and catch a ball. She could count, dress herself and wash up on her own. She was fond of playing games, imitating and playing with toys. She got along with others well although she was a quiet, fairly introverted girl. Her favorite activity was throwing a ball and her favorite toys were blocks.

The advocacy team who met Annabel in November 2016 said: “She was very shy and wanted to stay close to her caregiver.  She had surgery in 2013 for stenosis of the external auditory meatus.  She also has some eye issues and possibly has cataracts.  She can see well enough to play with toys.  Annabel was attached to her caregivers and although she was very shy around the team, the caregiver strongly advocated for her by showing us videos of the things she likes to do. The videos showed she enjoys puzzles, blocks, painting and climbing. 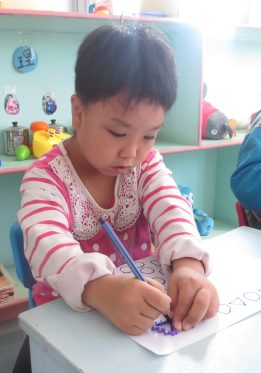 By caregiver report and videos, Annabel can speak in sentences and express her wants and needs.  She is good at relating to others. She cannot write her name but is learning simple Chinese characters.  Annabel reportedly struggles with math.  She can climb, run and jump. She is in Primary school, grade one.  Her favorite foods are rice and bread.  She really enjoys playing with blocks. Eventually Annabel warmed enough to get close to the team.