Hayden was born in October 2014 and found abandoned when he was around 7 months old. His medical file suggests craniofacial hemangioma, encephalatrophy with left limbs motor dysfunction, abnormal ABR of both ears. Potential Sturge-Weber Syndrome. Don’t miss his updates below! 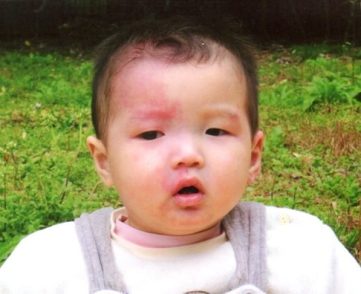 At the age of 7-9 months Hayden could raise his head while lying on his stomach and use his hands to hold toys and put them in his mouth. He reacted to the word, “no,” and could visually follow dropping objects. He liked to listen to adults speaking and would laugh happily when playing. He was described as being fair skinned and lovely. At the age of 10-11 months he could reach his hands out to get objects, roll over to both sides, had a reaction when his name was called and could play alone. He was fearful when meeting strangers and was able to show emotions such as sadness when he was hurt. He was babbling and would giggle when happy. At 12-15 months he could sit alone and move his body forward. He could play alone for a long time and coordinate his fingers to pick up, hold and pass objects. He could hold a spoon at meal times and would wave his hands at objects he wanted and would reach out his arms when he needed a cuddle. At the time of his report he was 18 months old. He could sit alone steadily or crawl to the toys or places he wants. He has grown close to the nanny who cares for him and shouts in protest when she leaves. He likes to play games with her such as hide-and-seek, passing balls, clapping and whistling. In the activity room he likes to play on a soft cushion. He enjoys playing on a toy piano and can make “mama” and “dada” sounds. He was said to be a very popular boy! 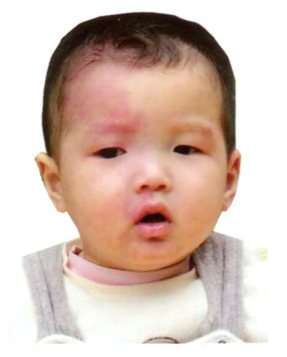 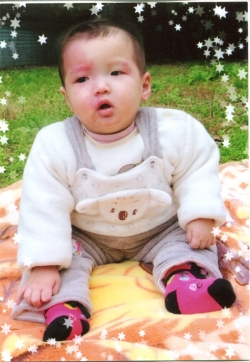 Hayden was a deep sleeper. He could imitate words and was potty trained during the day time. His personality was described as being active and extroverted and he enjoyed listening to music and playing with toys. His favorite activity was playing outside. 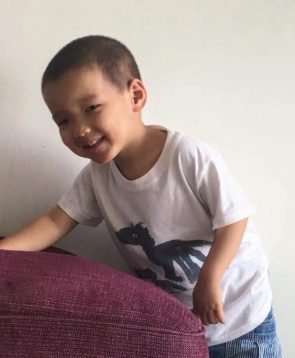 “Usually his physical condition is quite good and he rarely falls ill. At present the orphanage feels his hearing has no problem.  He can understand the teacher’s directions and his communication with the teacher is smooth.  If he is in the reading area, he will clearly express his thoughts, “Teacher, Xiao Yin reads books.”  He can verbally express his needs.  He can use simple sentence and can imitate adults’ speech.  For example, when he is in the corner playing, he can prepare to express his wants, “Teacher, Xiao Yin wants to play with blocks.” He can complete simple two-step directions.  He can also recognize commonly-seen objects like shirts and pants, and he can accurately point out where on the body a shirt goes and where pants go.  He can also point out flowers, trees, grass,  etc. 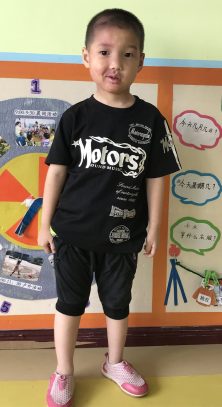 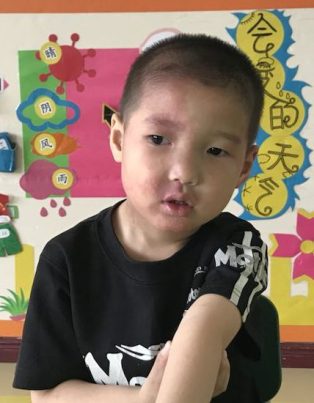 He can go up and down stairs on his own (holding the handrail) and can independently walk and run.  He is not very agile about jumping; he can only slightly jump on one foot on the platform. He rarely uses his left hand.  He also does not use both legs equally; his left foot is slightly weaker than his right foot.

He has not been found to have seizures. Because he has not been found to have particular physical abnormalities, he has not has another MRI. The orphanage feels that his hemangioma has lightened a bit compared to before and is also much flatter. He has received potty training in his kindergarten class. He is closest to the mother and family in his loving family, his teacher, and his kindergarten friends.

The orphanage reports that he does not have any unusual behaviors.  He is an extremely charming child who often helps the teachers clean the classroom.  When another child has been wronged, he will hug and comfort the child.”