Matthew was born in June 2014 and found abandoned when he was around 16 months old. According to his adoption report, he has been diagnosed with cryptorchidism (undescended testicles) and an unspecified chromosomal disease. Don’t miss the April 2017 update below!!!

Matthew’s adoption report was completed when he was 28 months old. At that time the said he had a good appetite, was quiet, introverted and liked music and playing with toys. He could crawl, use his hands to hold toys, stood alone stably and could walk holding on to things. He was close to the nanny who cared for him and his favorite toy was a bell. His favorite activity was walking was holding hands and walking. He was able to call “mama,” imitate words, and could respond when his name was called. At the time of his report he didn’t yet understand when being given instructions to follow. Matthew had a ready smile, got along with others well and was fond of listening to music. 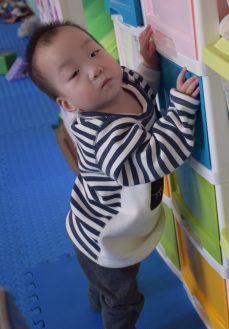 Agency staff spent time with Matthew in September 2016 and described him as a quiet, sweet tempered toddler. They said, “we each spent time trying to understand his unique needs…[he] has been diagnosed with cryptorchidism and an unspecified chromosomal disease that seems to be contributing to his developmental delays. Content to play alone, [he] also enjoyed chase games – although still cruising (or walking with a helping hand) he can crawl backwards very fast! He will look for dropped toys and enjoys playing this game with his nannies or others. He recognizes his name but is not yet speaking or able to follow instructions.”

In a March 2016 update caretakers said he loved to smile. He loved to play with nannies and kids. He could say “mama,” and was very curious.

In a November 2016 update caretakers said he still couldn’t walk on his own yet but would walk around holding the side of his crib. He was still not talking but would babble. He liked to be held by a nanny and playing with kids and nannies. He liked noisy toys. A CT scan was completed and the report is available with his file.

In April 2017 a medical assessment was completed with the information available (this report is available for inquiring families.) Within the report the doctor’s comments on his diagnosis include: “Moderately severe global developmental delay… Karyotype does not seem to show a specific problem, and no aneuploidy (visible change in the number or appearance of 46 chromosomes), but he is thought to have a chromosomal abnormality. He also has congenital dysmorphism (facial features, undescended testis), mild plagiocephaly (apparently the consequences of tight muscles on the left side of his neck), and CT scan evidence for no specific localized problem with brain building blocks, but possible sluggish flow of spinal fluid within the skull. He is reported to show continued developmental progress, no described stiffness or localized motor problems, social awareness and interest in interacting with those around him and with his environment.”