Wesley was born May 2013 and found by the gate of a hospital when he was about one day old.  He has been diagnosed with an external deformity of his left ear, cleft lip (repaired August 2013) and cleft palate (repaired May 2015).  There are also two ultrasound reports for his heart in the file that indicate CHD (PFO) but a year later the PFO couldn’t be found. A US cardiologist who reviewed his file believes that Wesley’s future cardiac health prognosis is good. 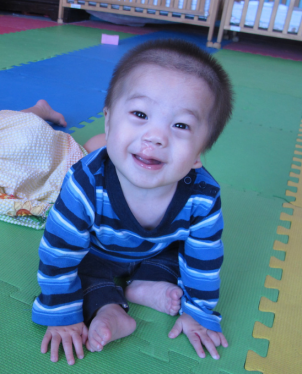 Upon admission into the orphanage Wesley was placed into foster care through Little Flower although he is now no longer in their care.

When his adoption file was completed he was 13 months old and crawling very quickly.  He was said to be a bright and active boy with a mild temper.  He was happy when playing with other children and unhappy when hungry.  He liked being held by his caretaker and playing with toys.

Wesley has no other health concerns than these. He has bowel and bladder control and reportedly has normal intelligence compared to his peers. His personality is described as lively, sunny, and sometimes a little stubborn. He enjoys being held by his caretakers and is most happy when playing with other kids.