Liam was born in March 2013 and found abandoned when he was about 3 months old. No diagnosis is listed in his file, however, I have been told he has PKU. Please Click HERE for more info about PKU.

Liam’s adoption file was completed when he was 12 months old. At that time he could sit alone for awhile, prop up his upper body when lying on his stomach, raise his head and look side to side and roll over. He could pick up toys and hold them and feed himself a bottle of milk. He would giggle when teased and liked being played with. His hands and feet would dance when he’d see his milk and after drinking he would smile at his caretaker. He liked bathing and playing in water and could eat steamed eggs and porridge.

He could pick up small objects with his fingers and was described as timid and shy. He liked playing games and his favorite toy was a rattle.

He is sitting on his own, making sounds to communicate and loves to play with other children. 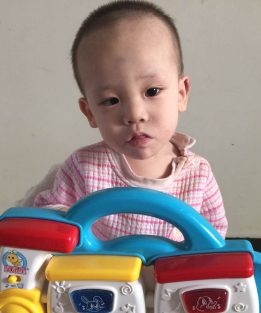