Frank was born in April 2012 and found abandoned when he was about a day old. He was sent to the hospital that same day for treatment for a rupture of a large mass on his back that had caused an infection. A month later, Frank received surgical repair for this, but due to infections from the surgery, he was not discharged from the hospital to the orphanage until he was one year old.

A month after entering the orphanage, Frank went to the hospital again to receive treatment for hydrocephalus. He had a ventriculoperitoneal shunt put in place successfully and was discharged a month later. He took antiepileptic medication for three months after the surgery at the request of the doctor. In the orphanage, Frank thrived. 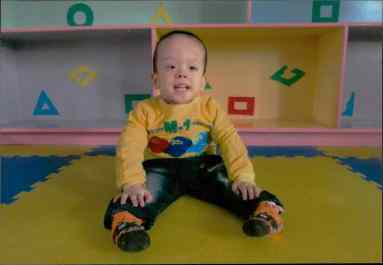 At first, Frank was scared of his new environment, but he soon grew comfortable with those around them. Frank would smile and greet his caretakers when they came for him in the morning. He was shown to be a happy and cheerful boy. At 16 months, his weight was increasing and his physical and emotional health was much improved. He always got along well with his peers and was friendly towards them.

At two years old, Frank began receiving rehabilitation training. Gradually, he was able to sit alone while leaning forward without assistance. He often imitated others and was curious when he saw something new. He began to speak and would name something as he saw it. He could name his body parts and loved to play this game with his teacher! At 2.5, Frank was drawing, playing, speaking, and acting like a typical toddler. He was very happy in the orphanage. Frank enjoyed music and snack time the most! In the play room, Frank gravitated towards the key board, beads, and puzzles.

Frank struggled to keep up with his peers due to his diagnosis of hydrocephalus and meningocele. His growth and development were slowed, he could not control his bladder or bowels, and he experienced lower limb dysfunction. Frank cannot stand or walk like most of his peers his age. Frank does have good control and function of his upper limbs. At 3 years old, Frank received further rehabilitation training, including muscle strength training of upper limbs and body, physical and performance therapy, language and cognition training, and training to help with movement, coordination, and sitting. His fine and gross motor skills greatly improved with this training. He still cannot walk and his intelligence is below that of most children his age, but his caretakers hope that continued intervention will help Frank catch up with his peers.