Tina was born in May 2010 and found abandoned when she was around 3 months old. She has been diagnosed with Down Syndrome.

From 3 months to her first birthday Tina was said to have an average physique, could visually follow moving objects, knew her name and was happy to see her nanny holding her milk bottle. From 1-2 years old she could freely turn over, reach for toys, could make sounds of mama, had flexible fingers and could untie her mat. 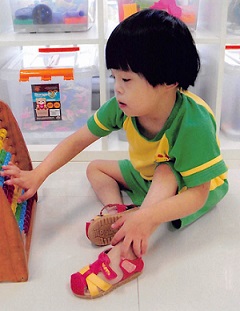 From 2-3 years her body changed a lot during rehabilitation training. She could sit independently, could hand objects to caretakers when asked for them and would crawl to her nanny when she heard her name called. From 3-4 years old she could untie her shoes no matter how tight the nanny tied them. She could stand up with support and walk a few steps although her walking was uncoordinated and she had unequal length of her legs. From 4-5 years old she could walk with one hand being held, could hold her spoon to eat, call her nanny, talk with peers and climb into her bed herself.

From 5-6 years old she grew more active and always had a smiley face. From 6-7 years old she learned to walk steadier than before, had a good appetite, could independently eat and drink, dress and undress herself and was cooperative with teeth brushing and bathing. Her language was weak but she could make sounds.

Tina could match four colors but could not speak their names. She knew her own name but not her age. She could stack blocks, put small items into bottles, run around obstacles, throw a ball, climb up and down a slide and walk in a line. She played with others and could wash her hands herself. She was still wearing diapers and her personality was described as active and outgoing. Her intelligence was delayed and she liked to learn new things and played actively.