Ethan was born in August 2013 and was found abandoned near his orphanage when he was around 10 months old.  He has been diagnosed with “central movement disorder” which sounds potentially like mild to moderate Cerebral Palsy.

Upon admission into the orphanage Ethan was stable but in poor spirit and sick.  He adapted to his new environment quickly and was sent to the Infant and Children Parenting Program to live.

He was said to have good sensory perception development and a ready smile.  He could look at others,  follow them with his eyes and respond to the facial expressions of caretakers.  At the age of 1 year he could hold his head up well turn to locate the direction of sounds.  He would giggle when played with and could stretch his arms out to reach toys near him.  Ethan could also kick his legs strongly, roll over and had was said to have average physical fitness and good physical development.  He liked to watch children around him playing and would follow them with his eyes.  When being cuddled by caretakers he would reach his hands out to touch their face.  When placed in front of a mirror he would reach out to touch his reflection.  Elijah enjoys playing hide-and-seek. 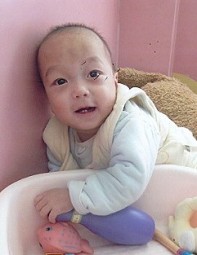 At 17 months old he could sit with his back against a support and often put toys into his mouth.  He liked to be around people and was active, sometimes impatient.  Caretakers felt his physical development was good, but that he had high muscular tension and uncoordinated movements.  He couldn’t stand or sit but was rolling over.  He had good living habits and a reasonable diet.  His favorite activity was playing outside and his favorite toys were rattles that made sounds.