Libby was born in February 2013 and found abandoned when she was a few days old. She has been diagnosed with missing her right ear.

Libby’s adoption file was written when she was 5 months old in July 2013. At that time she had a ready smile and could lay on her abdomen. She lived in a bright and spacious room and was developing normally. She could locate the source of voices and visually follow toys. Although reported to be a quiet girl she would laugh out loud.

UPDATE THOUGHT TO BE FROM JANUARY 2016 BELOW:

The first update, which wasn’t dated but uploaded in January 2016, reported that no surgery had been done but she had been receiving rehabilitation training beginning sometime in 2014 and the effects were significant. She could pick up toys and put them into the correct boxes, feed herself, roll over, crawl, move around in a walker and stand with support.

Her intellectual development was delayed compared to her peers. She could follow simple instructions, answer simple questions and say “mama,” want,” “um,” and etc. She understood big v. small. Although her language development was delayed she was able to use body language to express her needs and they felt she had great potential.  Libby was described as being gentle, optimistic and strong (especially during rehabilitation training.) She had a ready smile and liked being around other people. The staff were very fond of her. 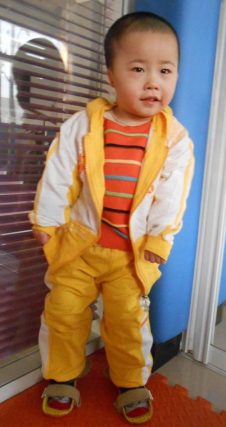 UPDATE THOUGH TO BE FROM NOVEMBER 2016 BELOW:

The second update, uploaded in November 2016, said she was healthy other than catching the occasional cold, and was living in the orphanage. Her mental development was still considered delayed compared to her peers. She could stand with support and was able to feed herself. Her language development was delayed but she could gesture to express herself. She liked to be with people and got along well with other children. She was receiving rehabilitation training and special education. She was said to be extroverted and liked cute little animals and the sound of toys. It was reported that she has normal hearing and no other medical conditions.