Ethan was born in June 2011 and found abandoned in October of that same year with a quilt, diapers and a container of formula.

When he was examined after entering his orphanage he was found to have a good mental state but had poor physical development and a rash all over his body believed to have been measles which he was successfully treated for.  In February 2014 he was taken to the hospital for a physical exam and his special need has been listed as arachnoid cyst in  cisterna magna – everything else normal.  I’m not sure what it means, but in the CT results the doctor wrote “Doubt of arachnoid cyst in the cisterna magna.”

At the time of Ethan’s report in March 2014 it was said that he has regular diet and sleep habits.  He has a good appetite and enjoys fruits, candies and desserts which he can feed himself.  They said he could crawl and stand alone steadily but wasn’t stable when walking.  He could scribble with a pen, put in and take out blocks from a cup, turn books and knew big and small. 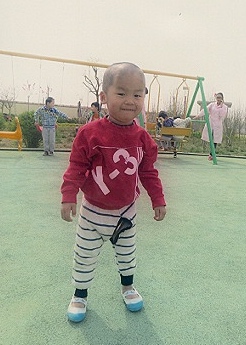 Ethan’s personality is described as being expressive and having a ready smile.  They said when he sees other children crying he will bring them a toy.  He observes his surroundings in new environments, enjoys playing with other children and adapts quickly.

2. Is he physically on target with other children his age?   He’s very healthy, but he walks with a limp.

3. His adoption file lists his diagnosis as  arachnoid cyst in cisterna magna.  Does this have any affect on his daily life?   It affected his walking, no other affection. He can feed himself, dress himself and walk. His self care ability is good.

4. Please describe his personality.  He is stubborn, affectionate and mischievous.

5.  What are his favorite activities?   He likes to play with ball, toy car and build blocks.

6. Is he walking independently now?  Yes, he walks well and rarely fells.

8. Why was a CT scan done when he was an infant?   All the children were given a comprehensive physical examination when they enter the institute.

9. Are there any other health concerns?  He had measles and is fully recovered now.

TO REQUEST ETHAN’S ADOPTION FILE PLEASE COMPLETE THE QUESTIONS BELOW: