Jacob was born in April 2010 and found abandoned at 5 months old. He’s been diagnosed with cerebral palsy. When he was 3 he began to receive rehabilitation training and in December 2014 he received surgery.

Due to the high tension in his muscles, he would lie in bed all day and struggled with movement. He continued to struggle with high muscular tension through to the time of his first birthday. He would grip the rails of his crib and his sheets very strongly. He was also unable to sit up or turn over on his own. Over the next year, his personality began to show through. Jacob liked to smile at his caretakers and was cooperative in trying to turn his neck and view the outside world. He was cheerful and unafraid of strangers. He was now able to sit up with support for a few seconds at a time and could roll over from his back to his stomach. He could not stand on his own due to the high tension in his muscles, but he was optimistic and would not cry when practicing standing. By the age of 3, he could stand for a few minutes with the support of the wall, could walk side-to-side by holding onto a railing, and continued to enjoy being around others.

After three years of living in the orphanage, Jacob started receiving rehabilitation training for his cerebral palsy. Before the training began, Jacob could not stand or walk on his own, had poor fine motor abilities, struggled to comprehend language and follow instructions, often drooled and could not chew well on his own, could not express his needs, and was rated as having the ability to complete 9% of his daily living activities on his own. This score is much lower than other children his age. With just three months of training, Jacob was much improved. He could follow directions, crawl on all fours, eat independently, walk with the help of a walker, and had much better control of his own movement. Within six months, Jacob’s ability to complete his daily living activities was now rated at 38%. 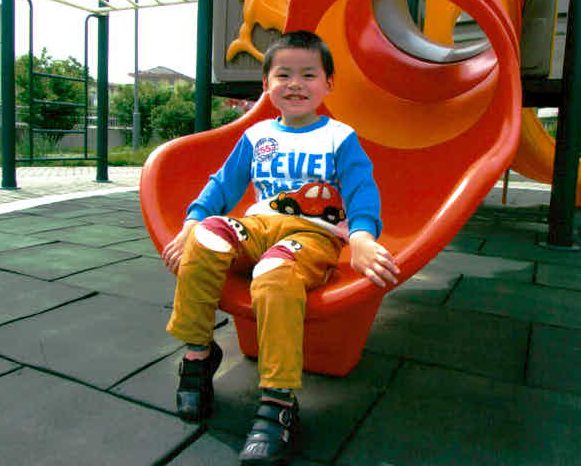 This improvement encourage Jacob and his therapist. Jacob began to enjoy his training. He could now complete many of the activities without the help of the therapist. He could walk straight without falling down, he could imitate simple words, he understood simple instructions, he became curious and explored his surroundings, he could walk up and down stairs while holding the handrail, and he had good hand-eye coordination. His activities of daily living score was raised to 45%. At this point, his training was adjusted to now focus on developing intelligence, improving pronunciation and language abilities, strengthening fine motor skills in his hands, working on advanced gross motor skills such as running and jumping, and raising his activities of daily living score as his age increases.

At four years old Jacob was bolder, braver, and more adventurous. He loved to play and spend time with his siblings and caretakers in the orphanage. In Dec. of 2014, he received surgery to help with his cerebral palsy. He healed well and continued with his rehabilitation training. By the age of 5, Jacob was imitating others, showed great empathy and kindness, had improved gross and fine motor skills, loved to listen to music and dance, and showed an active and polite personality.

Now 6 years old, Jacob is able to communicate his needs through sign language. His cognitive abilities have improved and he is now able to recognize shapes colors, and knows some of his numbers. He still displays an intellectual developmental disability in comparison to his peers, but Jacob does not give up. His happy, loving, optimistic personality has been instrumental in his ability to make such progress in his short six years. Jacob is a fighter and will not stop trying to improve his self-care ability.