Felicia was born in September 2014 and found abandoned at about two weeks old. She has been diagnosed with congenital heart disease (VSD) and syndactyly affecting both hands and feet.

When Felicia was 2-4 months old she could raise her head while lying and liked looking around. She could track movement and sound, and was happy when being cuddled. At 4-6 months she could roll over, move from prone to supine position, and could try to grasp toys. At 9-12 months she could crawl, sit up and lie down. She could try to stand by holding a railing and would search for the source if her name was called. 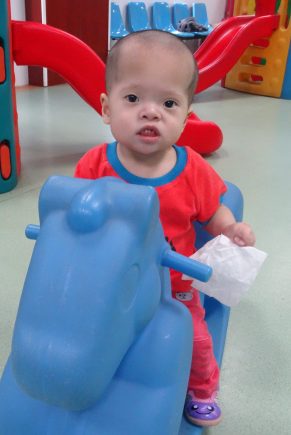 When she was 10 months old Felicia had a physical exam, CT test and ultrasound. CT was normal and the doctor didn’t think her CHD was impacting her physical development. It was suggested that she receive surgery for her hands after turning 2. At the age of 12-15 months she could stand up holding a railing, could feed herself biscuits, could move blocks from one hand to the other with the function of her right hand being better than the left.

From 15-20 months she could walk holding handrails, use stairs and observed her surroundings. She could say simple words like “mom” to her familiar caretakers and understood what “no” meant. She responded to being asked for objects and was cooperative with dressing. Felicia was described as being a quiet and introverted girl who likes music, watching cartoons, playing with toys and playing games with others. Her physical condition was said to be good. Her favorite toy was a ball.